Shining LIGHT to a darkened world

The holy anointing oil (Hebrew: שמן המשחה shemen ha-mishchah, "oil of anointing") played an integral part in the consecration and ordination of the priesthood. This sacred oil was used by the High Priest as well as in the consecration of the tent of meetings and the articles of the Tabernacle according to Exodus 30:26-30 and Leviticus 8:10-13.  Subsequent temples in Jerusalem were also consecrated in this manner. The primary purpose of the holy anointing oil was to cause people or objects which came into contact with it to become qodesh, or "most holy" (Exodus 30:29). In essence those anointed with the special blend became dedicated to be an instrument to be used by YHWH exclusively.

The law of Mosheh mandated that the oil was used exclusively for the priests, the Tabernacle, and the articles in the Tabernacle. It’s important to understand that the law of Mosheh was set as a pattern of a heavenly and higher order. Mosheh veiled the law in order to meet the Children of Israyl where they were in their cultural understanding. The intent for using this oil delved further than what the surface of the law mandated. Any individual who was dedicated, willing, and obedient to live exclusively according to the laws of YHWH, had this “anointing oil” extended to them. We see this extended to include prophets and kings, which the spirit of the Law of Mosheh intends, but did not outwardly mandate in the letter. However their lives were consumed through dedication in the business of their Father, whether they worked to warn, direct, or protect the people of YHWH (I Samuel 10:1).

The Holy anointing oil was forbidden to be used on an outsider, or person who was outside of this code of dedicated behavior (Exodus 30:33). It was also forbidden to be used on the body of any common person, or individual, not dedicated to YHWH exclusively (Ex. 30:32). Looking back to the Garden of Eden, we can see an analogy of how the spirit – or holy anointing oil, is forbidden to be used by anyone not totally dedicating themselves to Yahweh. Consider Adam after his fall. Adam was forbidden from being sustained by the Spirit of YHWH, because he was no longer separated unto YHWH exclusively. Adam caused this separation when he chose to follow to the voice of another, effectively becoming a servant to the one he obeyed (Genesis 3:22-24). The average Israelite was also forbidden to duplicate the formula of the holy anointing oil for personal use (Ex. 30:32). The oil was to be prepared by those who had been blessed with the skill, and who was authorized to craft the special blend.

In the sacred ceremonies the initiate was to swear to uphold the office. The initiation gave the king, or priest authority to perform his office on behalf of YHWH, essentially dedicating him to the Same. In Israel, anointing was not only considered a sacred act, but also a socio-political one. It was an initiation that gave one the authority to exercise YHWH’s will before Him, as well as, publicly before the nation, much like an inauguration of the US president today.

Today, the true concept of the holy anointing oil has been laid aside, hidden in the esoteric teachings of the sages.  Now, most practices of using holy anointing oils continue as a pseudo devotional practice found in various religious rites and liturgies.

The weight and measurements in the scriptures were based more upon approximations rather than exact.

Oils are the life blood of the plants and blood attracts spiritual forces. Oils can be used to protect the immune system. Anointing with oils and so smelling them, oxygenates the blood and creates a state that is able to cleanse and deodorize one’s system and environment. The anointing and smelling of oils also energize, calm, support and maintain the physical and mental health.  The blend that was used to anoint the priests had the properties to cause the physical body to oscillate at a very high level. This was used for the priest after they were prepared by a conditioned lifestyle and also went through a series of tests prior to their consecration and ordination.

The priest conditioning prepared them to mentally and physically interlace with the holy anointing oil, thus the oil did not negatively affect them by the time they were anointed. However this blend could prove to be very harmful to the body that was not prepared to sustain and contain such levels of vibration.
The Holy anointing oil was not used sparingly rather it was poured on the head of the anointed, as it is written in Psalm 133:2 “…like the precious oil upon the head, which ran down on the beard, the beard of Aaron, which ran down to the edge of his high priest’s garments”. The oil could not run down the beard and down the edge of the garment if it was just a couple of drops.

Even though the anointing formula had the capacity to raise the vibratory level of the physical body and condition it and the mind, the oil did not really make anyone holy any more than the blood of bulls and goats absolve one’s sins. If it did, the priesthood would have remained holy unto YHWH. Holiness is a byproduct of what one exercises within. Exterior props can assist, and do, but nothing takes the place of setting the mind on heavenly ideals and guarding it in the same.

The ingredients of the holy anointing oil conveyed the secret characteristics behind what one truly needed in order to be considered anointed, or holy to YHWH.

The secret hidden in the symbolic liquid Myrrh is that one must find freedom and joy in serving their Father. When we let go of who we are, then we are free to become what YHWH wants us to be. In so doing an individual allow themself to be used by the Father for any of His holy use.

The secret in the symbolic cinnamon is that one must find pleasure in being upright before their Father.

The secret in the symbolic sweet smelling calamus (cane) is that one must find pleasure in being a redeemer and savior of his brother before their Father.

The secret in the symbolic cassia is that one must reverence only their Father. Reverencing YHWH is the beginning, chief part, and only duty of man. These ingredients, together is symbolic of what one needs to redeem one’s life; hence, the sanctuary shekel, or what one truly need to inwardly develop in order to redeem the individual life from the dead.

The secret in the symbolic hin of olive oil is a portion, or deposit of the Holy Spirit enabling the priests to carry out their duty before YHWH in the earth.

A house is only as clean as those who live in it, and when these characteristics are living in the priest he is truly anointed, clean, dedicated and ready for the Father’s use.

Herein comes the Hebrew term "Messiah" (in Greek 798Christos) which means "the anointed one", and relates to anyone anointed (dedicated to YHWH). The anointed person could very well be a king, a priest, a prophet, or the school librarian. Yahshua was not of the priestly order of Mosheh. however He was of the priestly order of heaven, because He took pleasure in laying down himself in order to receive His true self. In so doing He was found fit to save and redeem Himself, and show His brothers, by example, the way to do the same.

When we are able to cleanse ourselves, living by righteous characteristics we attract the comforter, YHWH’s Holy Spirit. YHWH’s Spirit is attracted by His righteousness in the same manner that the blood of a young bull (Exodus 29:10) attracted spirits that were able to be directed ceremonially for the consecration and ordination of the priest.
The blood of a sacrifice attracts spirits that can bless, protect, or curse depending upon the officiating of the ceremony. Yahshua's lifestyle, like the blood, attracted a spirit, YHWH’s Holy Spirit. As with Yahshua, if we live by the example that He died leaving for us to follow, we also attract the Holy Spirit that will come and sup with us. The Spirit that gives one the realization and zeal to uphold this lifestyle is The True Holy Anointing Oil.

The following measurements are approximations, and for reference use only: 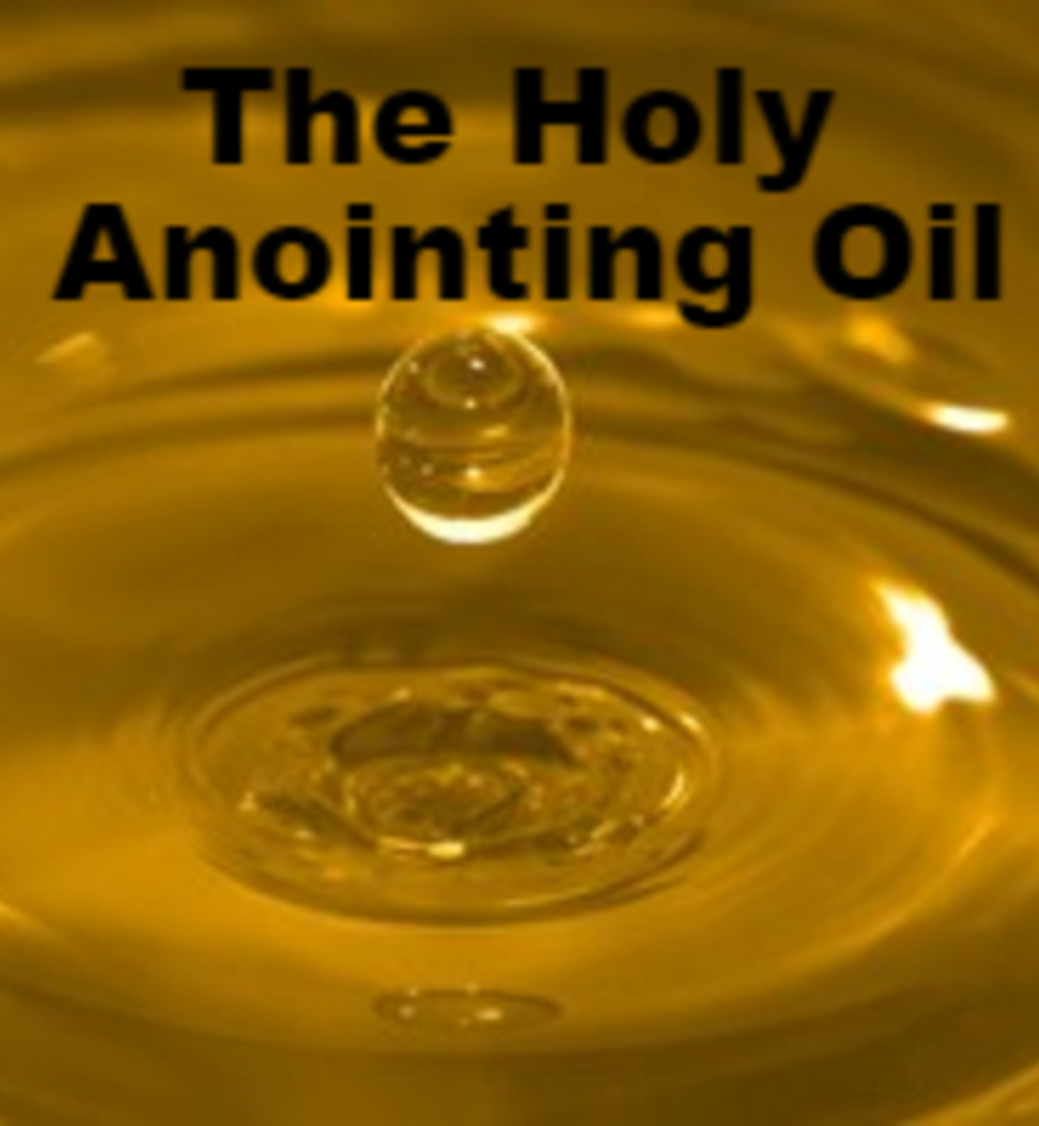